‘The Next Note’ is an interactive sound installation that will be launched at the ‘Rubik's Cube VI'. It is the first collaboration between Clare Gosling an interactive performance artist and Kelly Teh a new media experimental sound artist.

‘The Next Note’ is a fusion between the sound created by Kelly Teh and the paper ‘pakupaku’ origami which can be interacted with, created by Clare Gosling.

The ten minute sound piece is divided into 5 sections each representing a different London tube station. Each section of music will create a unique atmosphere stirring up certain feelings or thoughts. The audience can interact with the different sounds by choosing an origami ‘pakupaku’ colour that represents the sound and by writing words on it that they feel describes the music.

Kelly Teh is a Malaysian born New Media artist currently based in London. Teh’s creative work began in experimental music and sound art, which often etch visualisation in sound. Kelly has dubbed ‘stage sharing’, where every person in the audience plays a unique role on the stage.


20:00- 'FIT' by ELENA MOLINARO.
Elena's work is process led and research based, standing at the interface between live art and performance.

Her compositions often take the form of an installation performance where the audience presence becomes part of the same spectacle. The scenographic installations included in her work are made of personal objects, which contribute to frame her concerns with subjectivity and autobiography through symbolic and delicate interventions in the space. A strong visual quality distinguishes her latest work, and thus photography is often used as a means to create and document her work.

Elena’s artistic practice is informed by research into visual culture, history of the body, psychology, literature, and sociology. Her research questions on subjectivity and autobiography bring the body at the centre of representation. Here the body is conceived and presented as an archive where the marks of the past are conserved on the surface of the skin and through the simplicity of its actions.
The body becomes a site that speaks of social conditioning and personal memories.

For 'The Rubik’s Cube VI' Elena will be  presenting 'Fit'.

'Fit' is a performance for one performer and one spectator only. As the viewer comes into proximity with the performer's body, the close encounter might create the space for a honest reflection on the conditioning that shape our self image. Eventually opening up to a public sphere, 'Fit' questions the spatiality of female subjectivity and the modes of its construction.

Their original songs tell of three linked tales: 'Icicle Works' is an abstracted love story seen from the eyes of someone travelling on a Transylvanian train.

'Executioner', takes poetic license from the short lived relationship between Ruth Ellis and Albert Pierrepoint. Ruth was the last woman to be hanged in Britain and Albert was the official hangman.

'Wood' blends poetry, storytelling and the blues, while describing the parallel journeys of man and woman into a mythical primordial land.

The cover songs include Echo and the Bunnymen, the Animals, Lee Hazlewood and Nancy Sinatra and the Beatles.
They have performed  at various venues including the Montague Arms SE15, The Accidental Festival at the BAC, The Island in West London and the Variety Box at the Hackney Empire. 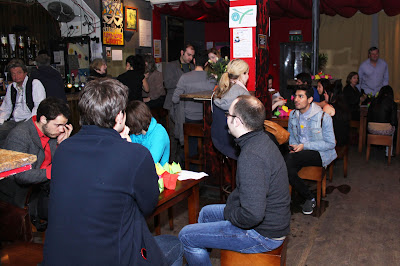 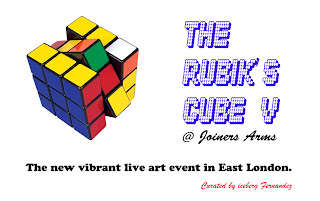 -19:00 HRS: PHILIP LEE & CALLY TRENCH
present 'DOUBLE HELIX'
Double Helix is a live body performance for two performers. Their bodies are transformed from clothed to painted in spirals of black body paint, via intermediate stages of nakedness, being bound in tape, and being taped and painted. The process by which the performers apply the tape, slap on body paint, and remove the tape demands a certain set of movements. The performers have to keep circling each other, making the performance dance-like. The process requires care and concentration. It is uncomfortable and constricting, and occasionally painful. It has elements in common with a magic trick, as the final removal of the tape reveals a spiral pattern on each body.
At various stages in the performance the bodies take on different characteristics  vulnerable and human when naked; sacrificial and meat-like when bound in tape; object-like and punished when taped and painted; and animal-like and elegant when the spirals of paint are revealed.
PHILIP LEE: http://www.philiplee.co.uk
CALLY TRENCH : http://www.callytrench.co.uk/performances.html
-20:00 Hrs.- KLK.
KLK are a group of three London based composer/performers, (Matthew Lee Knowles, Josh Kaye, Neil Luck) who have worked together extensively on many  projects, happenings, and festivals.  They have performed at experimental music,  poetry, burlesque, basement, art gallery and theatre events and other curious  locations around London and further away in Lithuania and Germany.
Performing works mainly by Matthew (also a poet) but increasingly including  pieces from Josh and Neil.  KLK focuses on the spoken word as music - patterns  and rhythms, overlapping voices, quickly spoken, suggestive and often  challenging.  A debut album has been released on Squib Box Records in time for  Christmas.
Pieces are a combination of solo, duo and (mainly) trio performances and involve unison speaking/shouting, piano accompaniment, word games, repetition, food and drink, interruption, provocative and colourful language, screaming, laughing,  controlled breathing, specific and free timing - and, importantly, lots of incredibly  difficult sentences, recited hurriedly with intentionally alien syntax designed to throw our mouths and minds off track!
MATTHEW KNOWLES: http://www.youtube.com/matthewleeknowles
-21:00 hrs- 'THE BRAKE DRUM PERCUSSION'